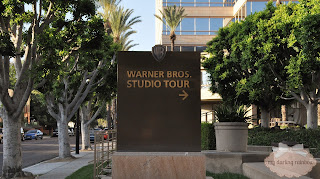 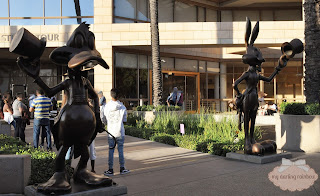 So, I'm sure it may be a new facet to those that regularly read my blog but I'm a huge horror movie fan, and actively enjoy watching scary movies of all types year round. That being said, it adds to my adoration of this time of year, Halloween. The time of year that people wont give me strange looks for binge watching terrifying things, back to back, for days on end....

Living in Southern California, there are tons of frightful scare events this time of year, but regardless of my love of making myself too terrified to sleep for days on end, I don't have the penchant nor tolerance for in person scare events. I've been forced like most teens in SoCal to go to misc terror zones and never fully enjoyed it, usually to the point of hiding in bathrooms, which, by the way is actually the worst thing to do at those types of places because the actors can smell fear and have extreme patience to wait outside the bathrooms...

In my ideal world, I want to just see all the amazing work put into mazes, take in all of the small details,the costuming and makeup on the scare talents. So, for the past few years I've just been enjoying watching scare mazes and zones though my computer screen and vicariously living though those brave enough to venture into those spaces.

Given these details, I was SO hyped when my friend told me about the relatively new Horror Made Here event at Warner Brothers Studios, which is only in it's second year! As a vague preface, it's basically a block party hosted in the back lot of the film studio where some of the great horror films have been made, hosting activities like scare mazes, photo opportunities, horror props on display and other fun things, no pressure to be absolutely terrified unless you so choose too and in varying degrees! Fun for the whole family and all types of film and scare fans, for real though~ I saw like two toddlers that evening having some chill time with Freddy Krueger despite his reputation with children. 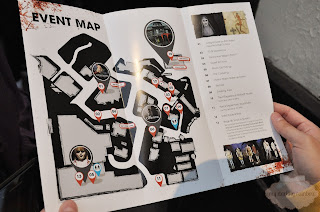 A map of the event~ lot of exiting things to do! 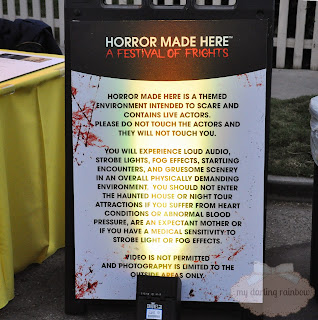 Honestly, the rules are quite strict but it's all for the build up because there's a lot of secrecy of what really is inside these mazes and the experience. Seriously though the hush around it is so worth it, and not worth spoiling given that this event seems to be one that will only get better as it grows.  I also really enjoyed that there's limited tickets available for a scant amount of days and the crowd is kept purposefully small and comfortable.

Adding upon that, the lead up to entrance and the actual venue is quite exciting, or at least it was to me, you stand in front of the studio and are then carted off in a shuttles in small groups to the set where the event takes place, definitely feels exclusive and gets the mood going.

Upon arrival though the small set alleys, you're dropped off right on the set where the recent IT movie takes place. Stage left, where the highschool from IT looms and the set opens up as you walk forward revealing the  central park where family stores line the street across, a rustic chapel on the far edge along with other scenes that feel all too familiar from other movies and also TV shows that have made this generic neighborhood feel just short of homely. 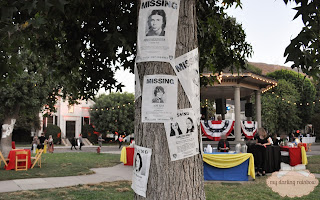 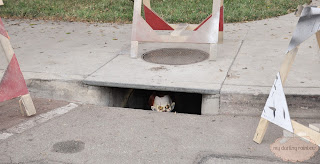 Once collected, the realization that things aren't like Stars Hallow, Connecticut (Gilmore Girls) and are truly set up to be the town of Derry,  where IT resides, an eeriness settles and looking around there are scares hidden in plain sight. People being chased by nightmares while a DJ plays spooky remixes and screams echo in the twilight. 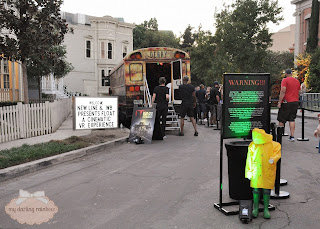 There's multiple scare opportunities that are far more terrifying than the open party space, the most unique I feel is the IT virtual reality [VR] experience held in a terrifyingly decrepit school bus. 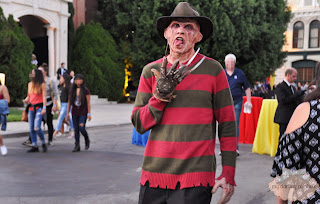 The school set seen upon arrival, was the enclosure for the Nightmare on Elm St. maze that contains a Freddy Photo opportunity upon the last scare within the building. 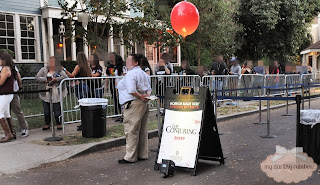 Within the main neighborhood, the Conjuring maze innocently sits, but the peaceful scene is broken every 5 minute by groups literally slamming the exit door open and running out in blood curdling screams, which is hilarious but even more ominous. I was actually too terrified to even enter the line, the employees guaranteed the absolute terror of the maze barely reflected the panic of those bolting out. Part of me was intrigued but the promise of what awaited had me stay far far away.. 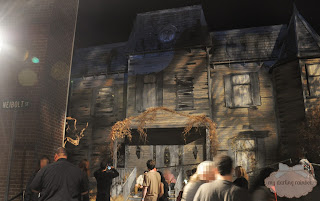 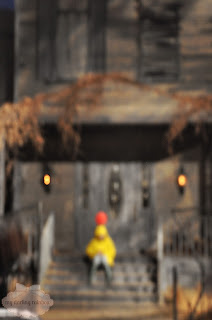 The other maze available to enter was the Neibolt House from IT, also seen as a promo event in Hollywood as a stand alone walk though maze. The house towered in a dimly lit back street and a figure of Georgie waited on the steps for the next set of victims to enter if they dared.

The unique experience of all these mazes is that groups were let in one at a time, which is probably why the admission/tickets were a limited number. The lines all caped at a one hour wait, as small groups of 2-5 people entered alone once the last group exited, or more like ran out of, the buildings, which added to the personal experience of this event. The queues were well organized and the staff well equipped to keep the lines well organized and moving smoothly and efficiently, I was very very happy with the treatment and jovial attitude of all those staffed to take care of all of us.

Within the chapel there was also hourly scheduled makeup demos covering a variety of makeups from easy creepy makeups, to popular movie character makeups, to full prosthetic applications. It was actually quite enjoyable to watch and to chat with the artists on set who were more than happy to answer question and tell behind the scenes stories from makeup jobs they have worked on and show off the makeups being done to scare actors about to enter the mazes. 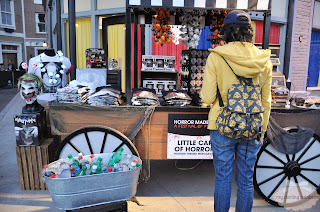 Out in the main courtyard along the street were merchandise carts full of lovely horror paraphernalia to take home and were even stocked with cute Halloween sweets. Parked along the town's park were food trucks having everything from Mexican food, Greek and fried fair foods all were even stocked to cater to those with vegan lifestyle choices. 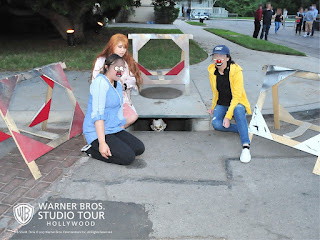 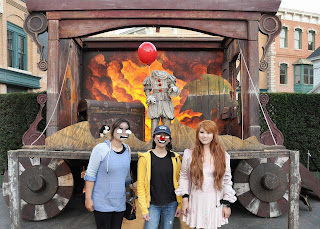 Among the festive atmosphere were photo zones catered to scenes from IT, one including prop pieces from the movie, all  of them being lightly immersive with sounds, dynamic lighting, and anamatronics speaking dialogue from the film which all further immersed attendees. Definitely a treat for fans of the franchise!

Roaming around the main center were characters from IT, Nightmare on Elm St., The Conjuring, Gremlins and a few other franchised films. Some even putting on reenactments and setting the mood, scaring patrons, chasing them, posing for photos and sometimes even dancing to the pulsing beat of the DJ booth. It was definitely a great time with a unique atmosphere, and I even got scared a few times, all in good fun! 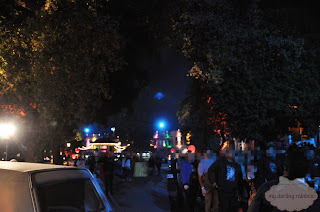 Once 'dark o'clock', according to staff, descended the music began to crescendo, the lights turned on to an array of colours and the real ghouls came out of hiding. 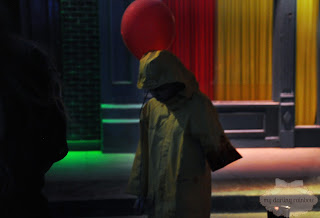 Bloodied and creepy characters started pouring out of a dark alley way to meet the crowd and really amp up the overall scares out in the open space, much to the delight of onlookers, I really enjoyed the interaction with guests and the banter with the the spooks, it was actually quite a highlight to the evening!

Among the backlit windows payed scenes of multiple horror films, some creepy, some haunting and some hillarious. The Gremlins house/window scene was seriously entertaining full of hijinks and antics! Definitely a lot of work and love put into all the small details of this event. 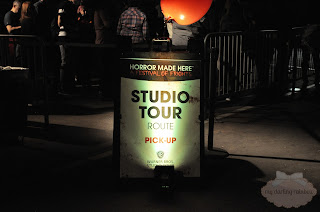 The part of the tour I was anticipating the most with the coming of night fall was the Studio tour! Again, like all the mazes, it was done in small groups on  shuttles that transported 9 people though the backlot for a creepy and guided look at the scenes of famous and/or spooky TV shows and movies, regaling guests with true ghost stories and hauntings of  movie productions, neighboring places in Hollywood and even the studio itself.

Above are a few photos I managed to take of Mr. Wings shop from Gremlins and of The Radley from Pretty Little Liars, quite hard when filming and flash isn't allowed on the tour and the whole lot is dimly lit to set the mood to hide what ghosts may be, actually, DEFINITELY are lurking in the shadows.

The tour ends at the entrance of the WB prop house, where props from multiple productions filmed at Warner Brothers are resting and  are on display for guests to the studio. The specialty for this Halloween tour are the horror movie props they put out which was amazing to see in person. 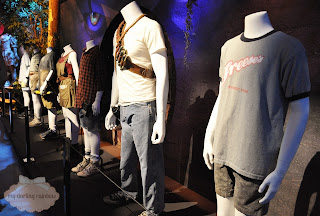 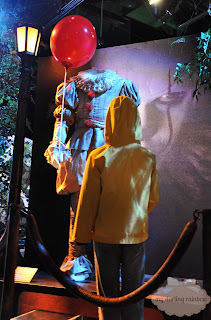 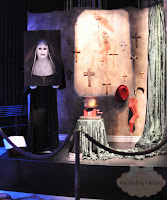 Another set on display held item and costumes from The Conjuring, including the actual Annabelle from the movie who was rocking gently in a sectioned off corner of the room. 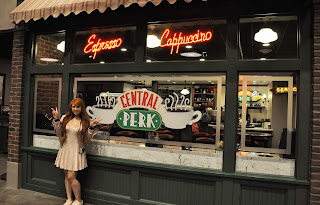 The prop house also held green screen rooms and other pieces from blockbuster classics which are actually available for the normal Warner Bros. studio day tour. Unrelated to this post but one I definitely geeked over and wanted to include was the set of Central Perk cafe from Friends the TV show which was absolutely a great treat to sit in and experience in person. 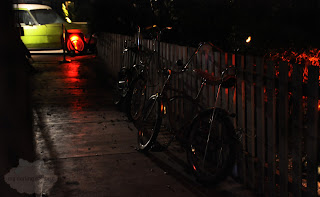 Sad to say, Halloween season is at an end, but I will be glad to experience this tour in the following years and seeing how it grows and what movies will join its roster and the amazing crew that put this unique experience together. 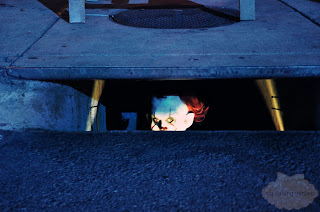 'We all float down here~'

<3CarisseIris
Posted by Unknown at 5:07 PM