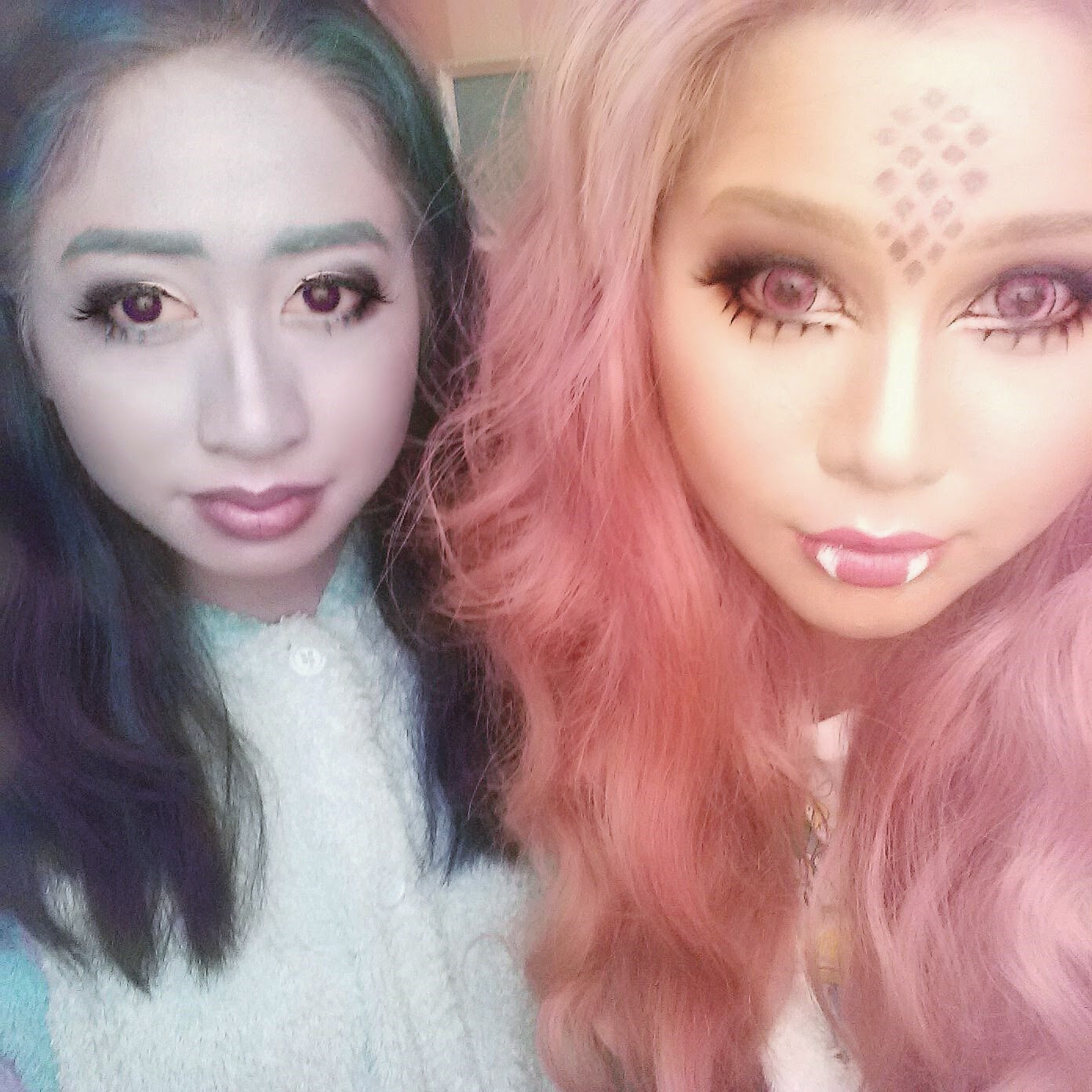 Halloween is my favourite holiday, and besides going all out for Disneyland every year, I like to put my all into actual Halloween night looks too.  This year I wrangled up my friend to dress up with me and we decided to be Monster High dolls. The night before we were looking at the different dolls finding ones we could pull off decently and we decided on Twyla, who's a boogyman and Viperine Gorgon, who's a gorgon [like Medusa].
I'm not sure if anyone loves seeing how people create looks, but I personally love it and thought, 'Why not!', and just share on here how I create my makeup looks...

I always start with some idea, for these looks I was lucky enough to have a lot of pictures of the dolls also the animations and screen grabs. So, I take those ideas and make a bunch of face charts.

I usually end up making 2-4 face charts per look, for face charts I always make my own and photo copy the blank face, so it's easier and quicker for me to just colour on it to map out my ideas. Above is the look I loved the best and ended up going with for my friend. 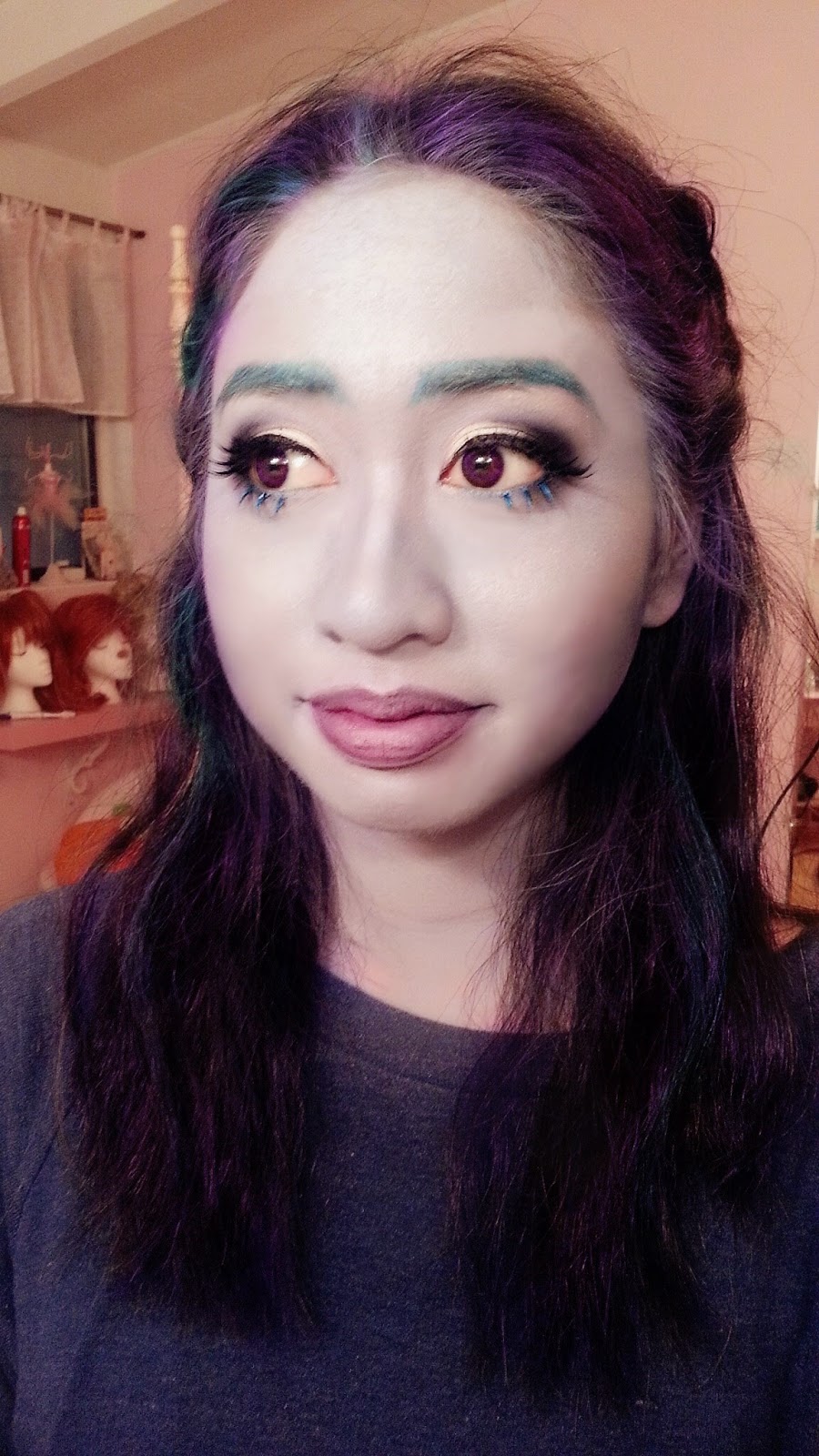 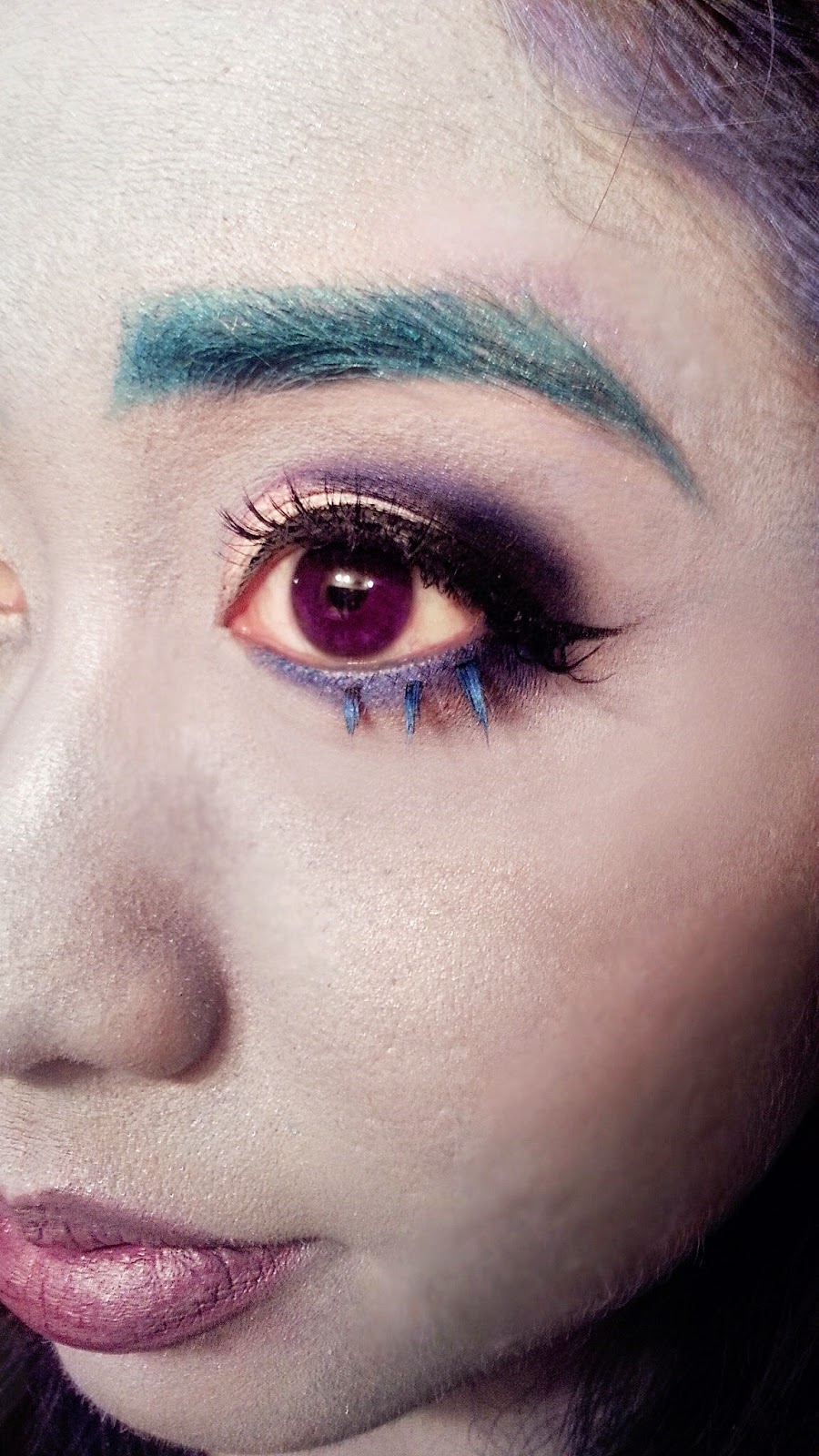 The description of the character is said to have grey skin, but the doll is much more lavender in colour so I ended up air brushing my friend with a lavender base then whipped up some grey/blue powder to set it, to give her a mix of both and the colour turned out just lovely. All her contour was done in navy and grey so to blend nicely with the periwinkle skin tone. I also airbrushed her hair, but it didn't show up so well on camera so I did retouch it and her iris' with some photoshop. Luckily her doll's makeup is very basic and I went with a classic cut crease + winged liner combo and finished it off with some Dolly wink lashes, top and bottom. The bottom lashes I coloured with blue eyeliner.
For blush, I went with a berry colour mixed with a touch of peach just to make her look a bit less undead.

For some reason, I picked Viperine because she looked the easiest, plus airbrushing my own face is a bit tricky for me.. The exact eye shape is hard to pull off neatly on my eyes especially because my inner corner of my eyes are hooded, plus I didn't want the look to appear clown-ish or very over drawn.

Immediately in my head I knew that I would be using Adore Delano as partial inspiration because of the way she draws her inner eye corners, Bianca Del Rio, for the way she draws her crease into her nose contour and then realized the way AV gals do their lower lash line would work well for the look too, so I put it all together and I figured out what I was doing~

After two face charts, I decided that instead of going with a taupe eye, like the doll, I would go a bit extreme with golds and bronze colours and it would be more exciting visually. I also changed the scale colours to fit that idea better so those became a mauve and orange for the look. 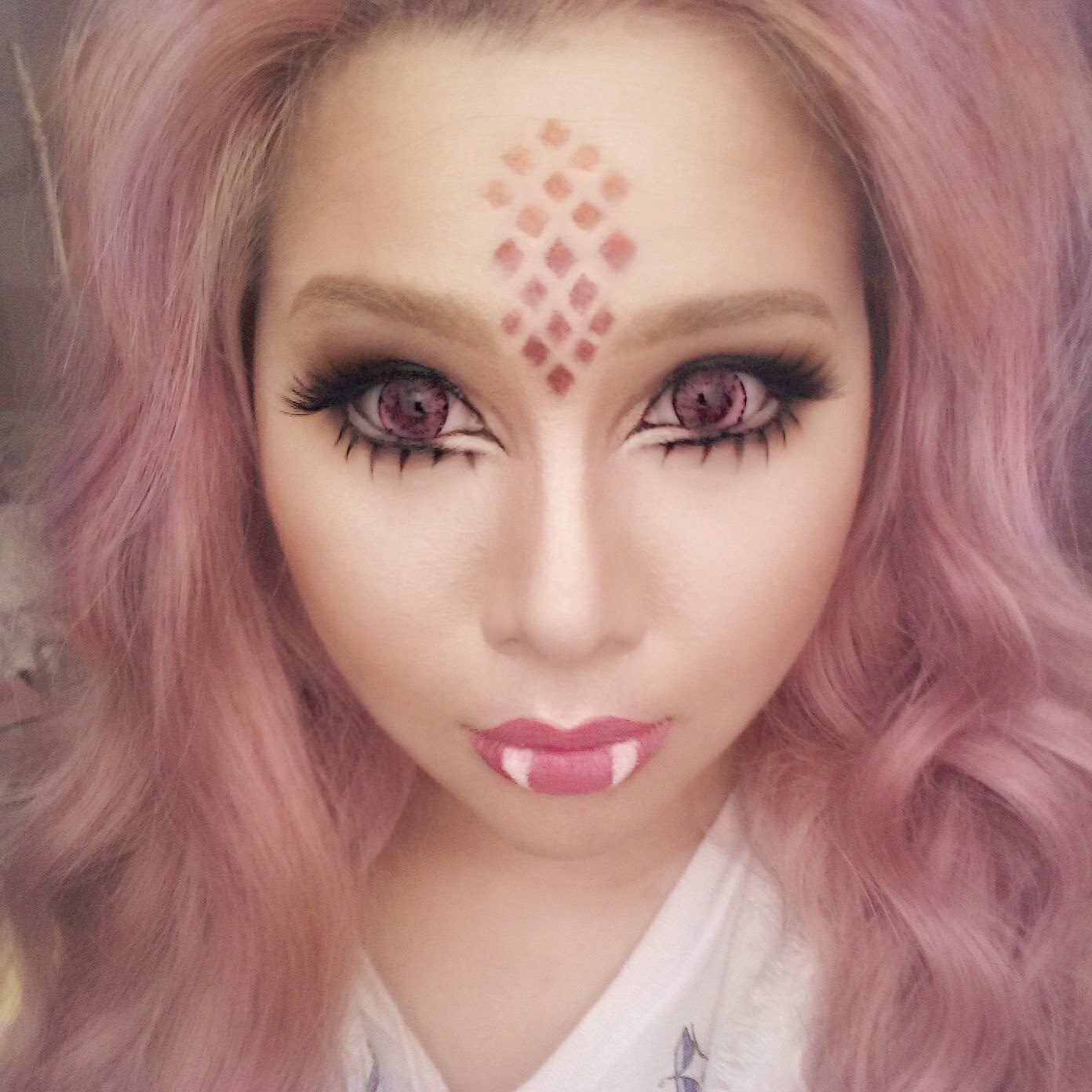 For my base, I mixed my foundation with a very shimmery eye shadow [I went out to buy some Wet and Wild shimmer for it], for up close the doll has a glittery and shiny base colour so I wanted to replicate that. I then contoured my face in the extreme with a bronzer and other shimmery copper eye shadows that I own then went in and highlighted my face with the same shimmer eye shadow that I put into my foundation, even some very pigmented gold shadow at the highest points of my face.
I drew the scales with some lip liner then filled it in with a bit of eye shadow. 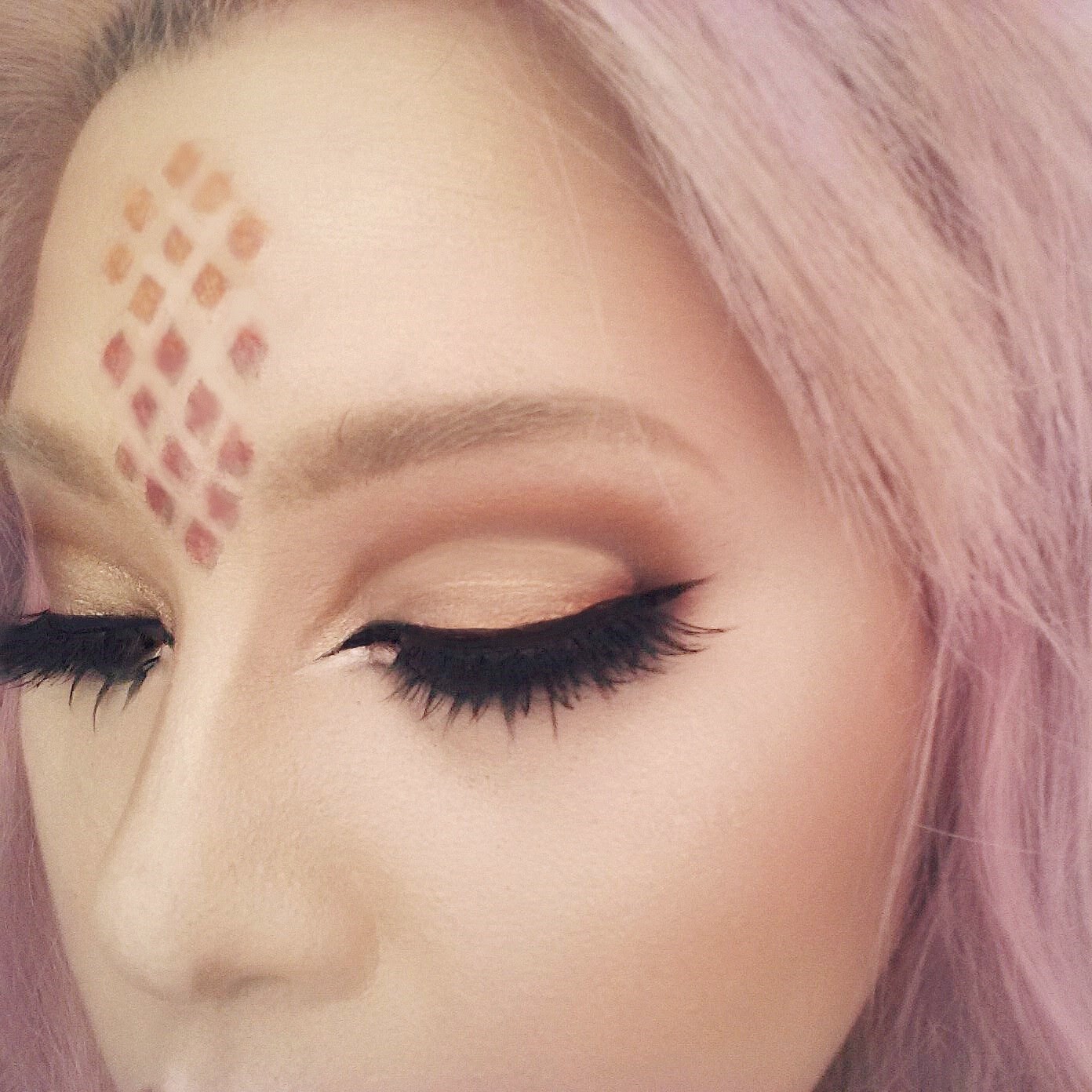 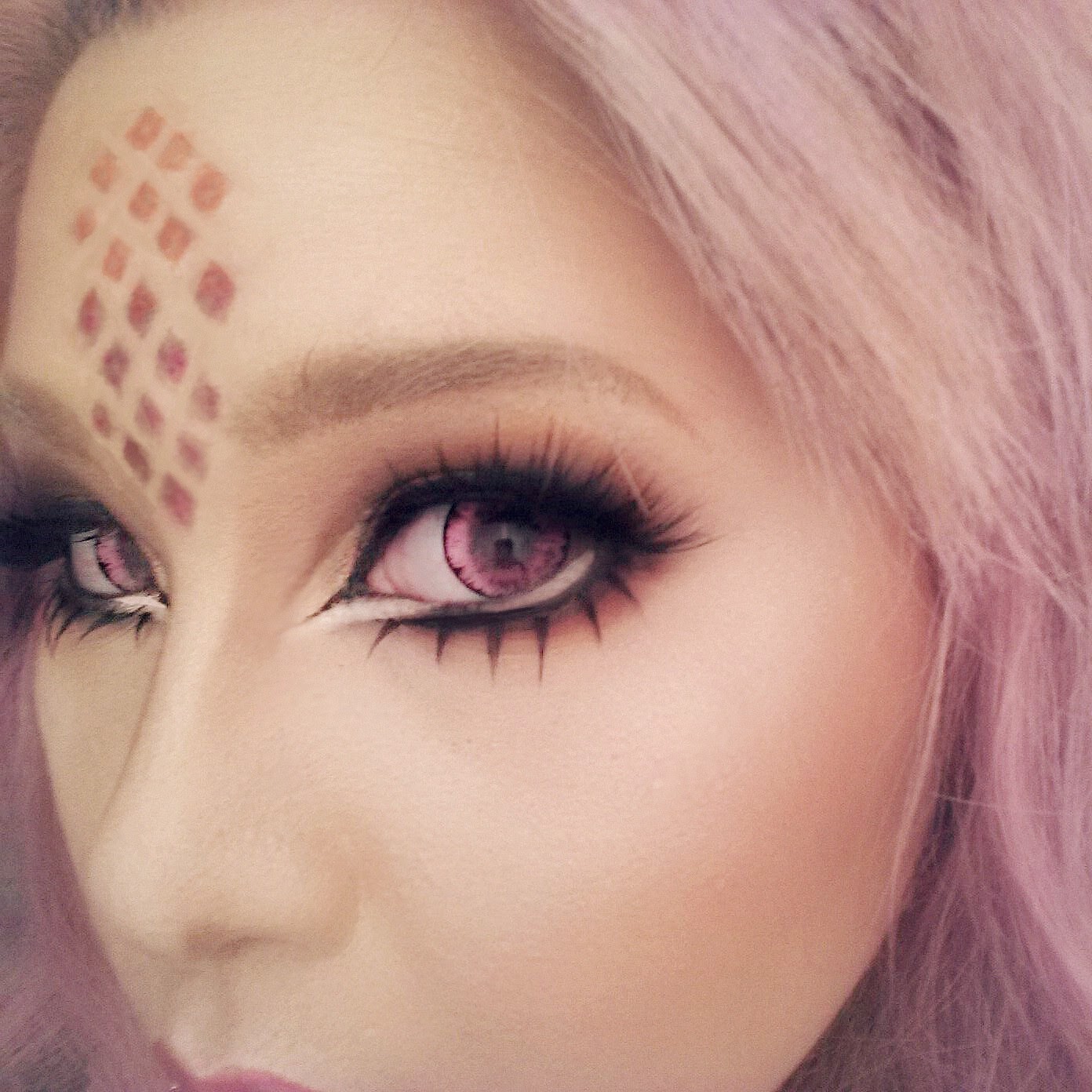 The eyes are an extended cut crease. The liner is winged and extended down past the tear duct. The lower lash line is dropped, then is extended under and past my natural eye line. I have on house of lash, top lashes and Dollywink bottom lashes.
If anyone's interested [these] are the contacts I'm using.

I'm pretty happy with how these looks came out, way better than I was expecting, but they still do need some work if I ever decide to recreate them...

If anything, I hope you enjoyed the peek into how I create my makeup looks. And yes, I even do face charts for when I do simple looks like my Roxanne costume and sometimes even my gyaru looks when I feel like trying out a new eye shape.. They're a great visualization for me and I don't have to waste my makeup on them. 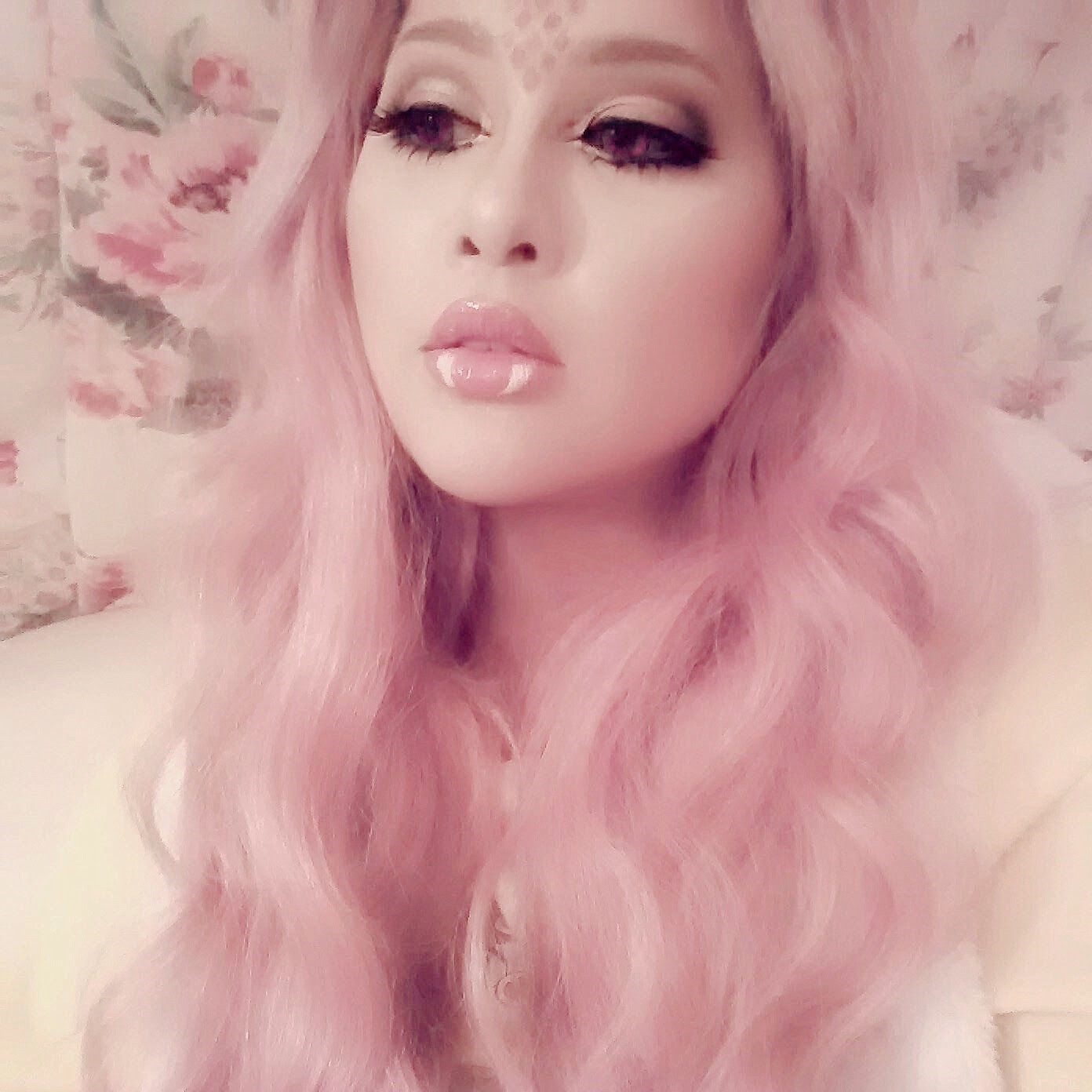 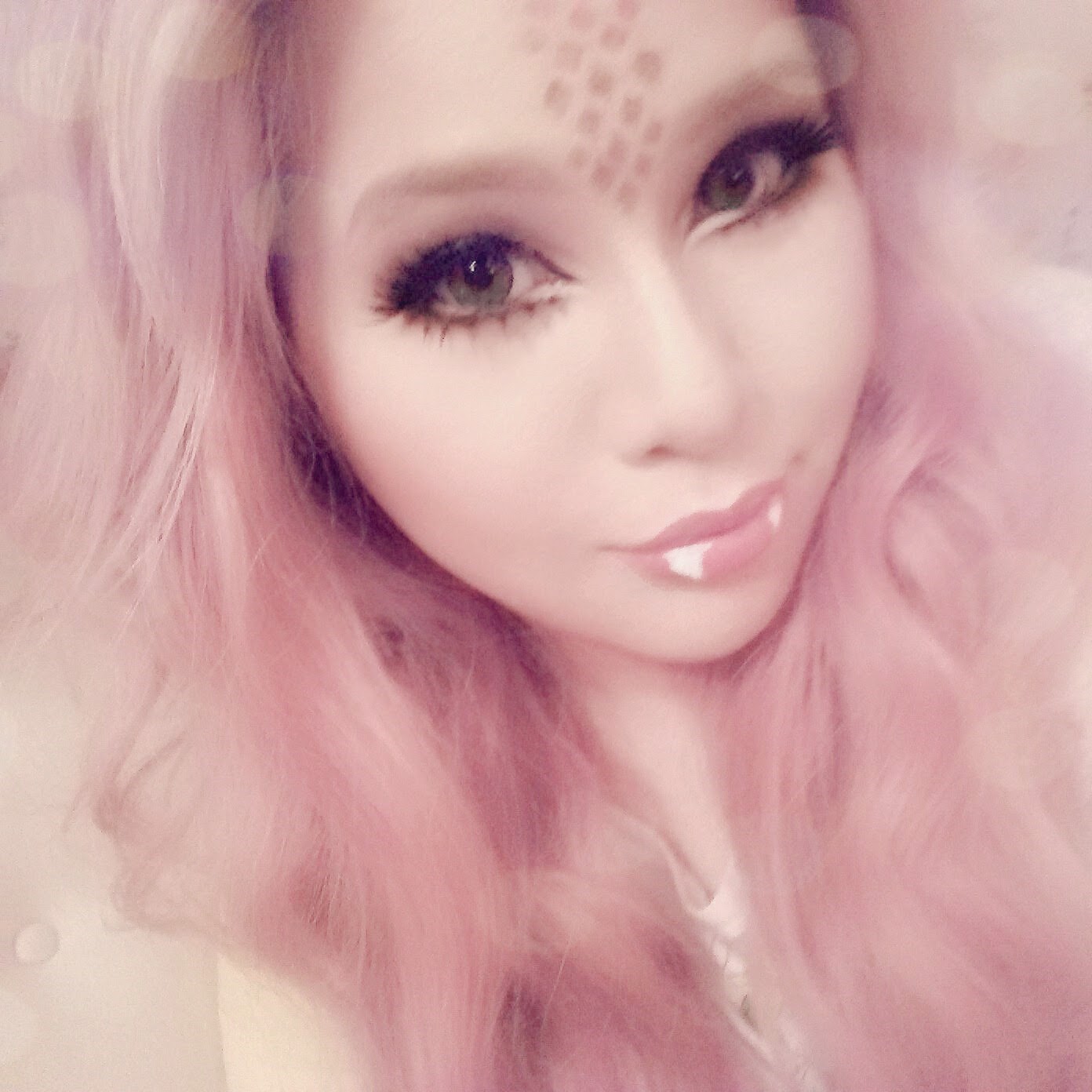 Hope everyone had a fun and safe Halloween!