Royal-T Maid Cafe and other things 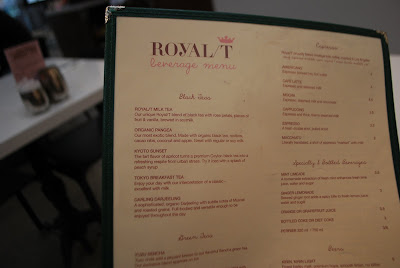 So, my friend and I paid a visit to Royal-T in Culver city.. It wasn't my first time there, so I kind of knew what to expect, but it was my first time trying the food... 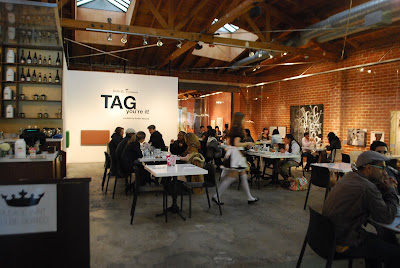 You walk up to this 'hedge' covered entrance and walk past the mini store on your left and giant mod art on your right and are greeted by this. Not really how one expects a maid cafe to look. It's very minimalistic and sort of reminds me of what 'Urban Outfitters' would look like if it were a restaurant. One thing I did enjoy was the crowd. It was collage kids and older and the atmosphere was really laid back and relaxed. There were also some families and the kids were really well behaved so my friend and I were really impressed. 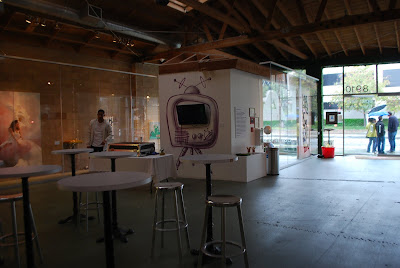 There was even a dj that was playing trance music kind of loudly... Er, the music in general was kind of loud, so it was a bit distracting from our conversation... 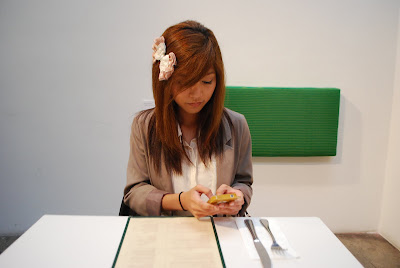 Any who, my friend and I came prepared with a good amount of money because I was ready for the food to be pricey and oh was it pricey... Thank goodness the tea was US$4.50 for a small pot... At least it was relatively normal priced. I'm also not sure how organized the staff was that day cause we were asked to place our beverage order by 4 different servers, not like I don't mind, I really don't.. But 4 servers asking is a bit excessive. 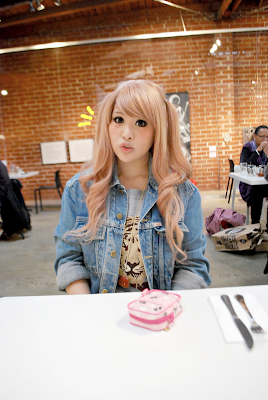 Though, I kind of really love the mod art used as decor, I would have loved to go look at every piece but that would have been really awkward seeing as there were patrons eating where the art is showcased. 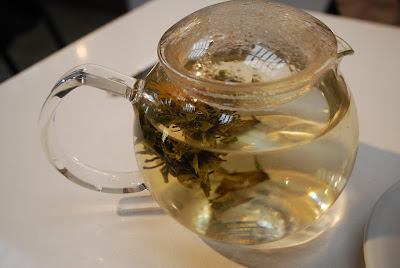 Oooh la la, my friend's tea was super pretty and yummy... I kind of wish that they gave us honey and for some reason, it was hard to flag down a waitress, go figure... 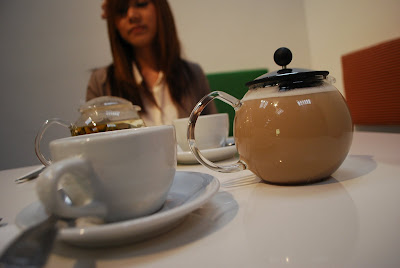 My Royal milk T.... It was okay and a bit on the bland side, er, very much on the bland side... Maybe I expect too much? My friend really liked it though, so it might just be me..
Any who, we finally ordered, and my friend got yakisoba and I, the salmon rice bowl.. 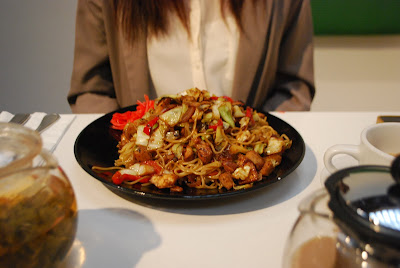 Mmm, her yakisoba looked really yummy, I believe hers was around $12 usd? They really gave a lot~ 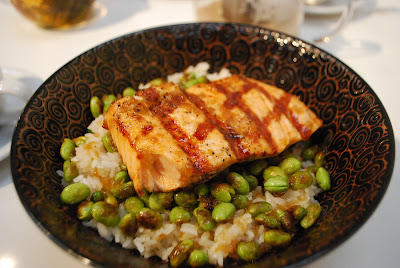 My salmon bowl which was around $14 usd? Which is pretty expensive for a salmon and rice dish, at least for me. Not to mention that the salmon was really bland and almost on the dry end which is not what expect when I pay $14 for a dish... I really liked the soy beans that were cooked in balsamic vinegar, that was my favorite part of the dish. I don't even know why I ordered a rice dish because I didn't eat the rice because I don't really like rice that much...
When we were finished, it also took some time to flag down a waitress for our check.
I really wanted to ask for a picture of one of them but 3 out of the 4 waitresses we had were very brisk and curt, I'm sure there'es a reason for that but it kind of rubbed me the wrong way so I didn't want to ask them.. There was on waitress who was super sweet and cute with a brow piercing that I wish I asked, but she was super busy and I didn't want to bother her, so alas, we paid and left without a picture of the maid costumes...
But, I'm going back this weekend to try dessert or something... My friend I went wish is actually writing a paper about maid cafes or something so she is researching this place and she needs to chat with an employee next visit. Hopefully it goes better next week and hopefully I can get a few good pictures of their uniform. 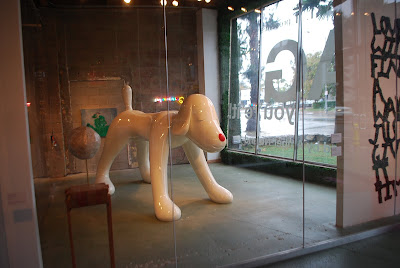 The giant abstract art as we were leaving...
I felt kind of bereft afterwards and thank goodness Cool Haus was just down the street [previous entries 1,2,3]
Always amazing and fun service and delicious dessert for a great price! <3<3 I seriously have an obsession with this place! 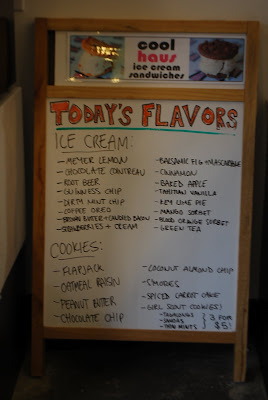 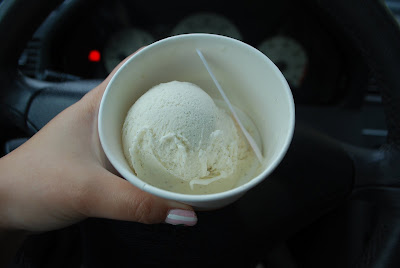 I ended up getting the Tahitian Vanilla, and oh my gosh! I'm so infatuated with that flavor! I think it's my absolute favorite now, like, more so than any of the previous ones I've had. 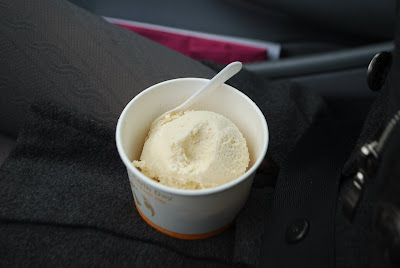 My friend got the baked apple pie which was so scrumptious and ad apple chunks and really tasted like apple pie a la mode~
We then decided to go take some puri before the day ended. 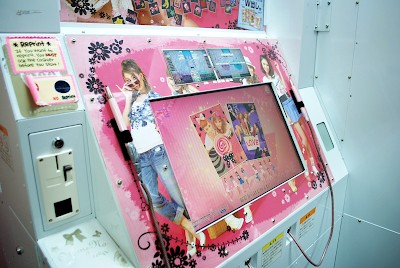 This is our favorite machine, not only because it's really good but because we were invited to be the first ones to use it when it came in <3 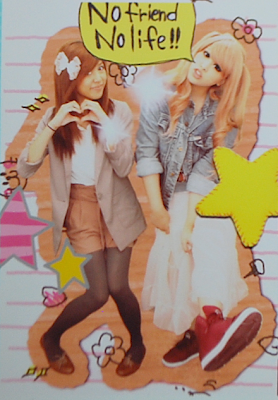 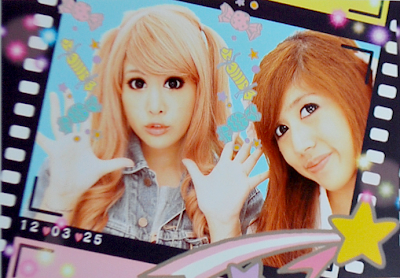 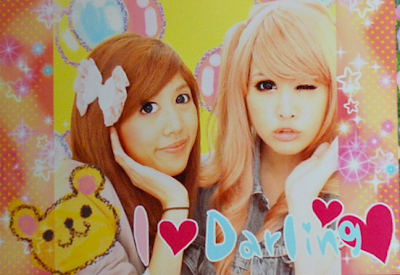 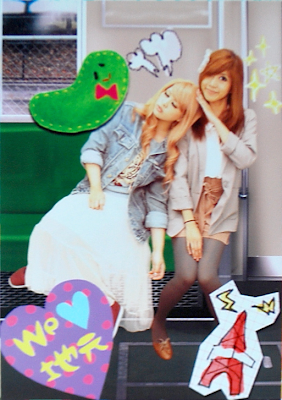 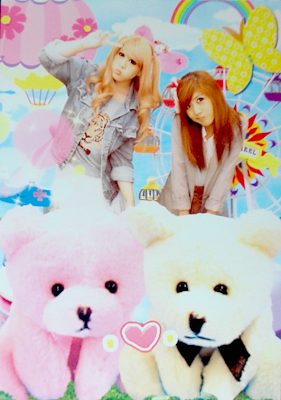 I seriously love taking puri because it's so fun! <3<3
And I'm so happy my friend had some free time to hang out! 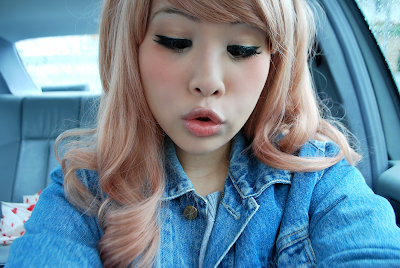 Oh, on another note, I tried out that new blush trend I've been seeing lately, the one where blush is only applied underneath the eye.. I believe it's been Momoko and a Kera model I've been seeing it on as of late and I'm still on the fence if I love it or hate it... 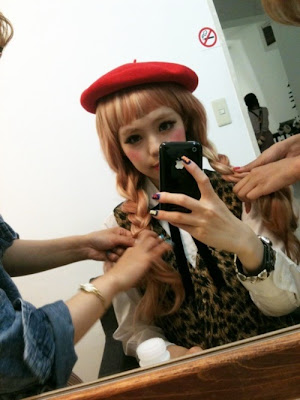 ^^^
Something like this, but there are more pictures out there that I've seen but can't find, but you get the picture...
Yepp.
<3CarisseIris
Posted by Unknown at 1:32 PM