So, I have a Pink Nintendo Switch 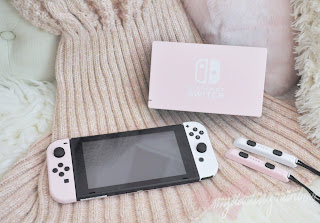 With Pokemon Go Pikachu and Go Eevee announced, I decided now was the best time to justify purchasing a Nintendo Switch. Though, if I wanted a Switch, I knew I would only find it worth it if it was one I actually liked the look of. I mean, the initial investment is pretty high, especially coming from me who isn't used to buying games or consoles.

After some googling and review searching, I decided to purchase my Switch though ColorWare Inc. 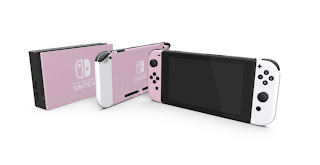 ColorWare Inc. is a website that sells different gaming consoles, mobile accessories, and other bits of miscellaneous technology~ but with the option to customize the colourway it can come in. With a lot of positive reviews and photos of their handiwork, I happily and confidently decided to order my own pink edition of the Switch from them. 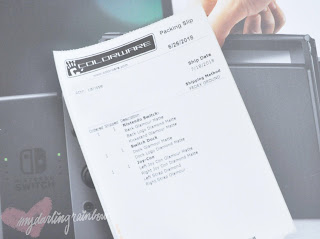 The colours I decided on were an arrangement of the metallic shades, diamond and glamour, but in a matte finish (I read multiple opinions online of people recommending and pushing matte finishes for hand gaming accessories because apparently they're easier to keep looking clean/finger print free).

I ordered my switch on June 26, and it arrived July 18th~ which was just within the 2 month estimation given to me upon ordering. 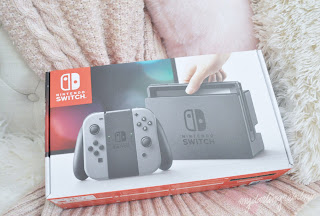 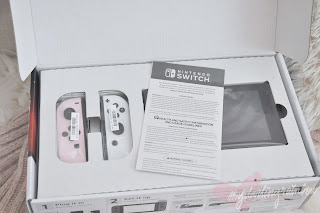 The Switch arrived in it's original packaging and nicely put back together. I was happily surprised with the extremely professional way it was presented, and doubly surprised at the high quality work my Switch had upon opening it! 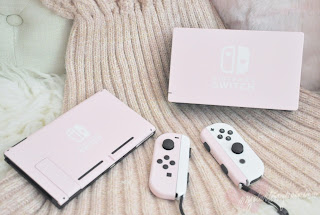 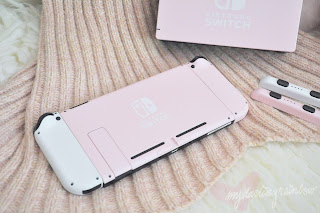 I have to admit that it looks prettier than anything I could have ever imagined (especially from my assumption that it may be a deeper pink, from the product colour generator and that there weren't many examples of what glamour pink looked like). 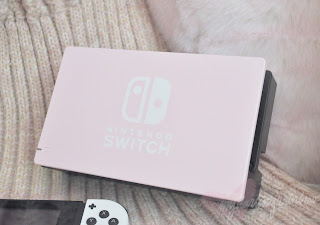 ColorWare Inc.'s work is absolutely superb. The colours are clean, with no blemishes or imperfections. Every line is crisp, and every surface completely opaque. Especially with my tough handling of my console, there are no external signs of ware that would belie that pink wasn't it's original colour. 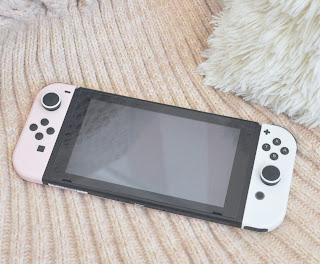 Some of the first accessories I purchased for my console were thumb grips. Since I play Splatoon 2 quite often, I figured it would give me a bit more traction and control on the joysticks. Also, with all my game hours, the pads of my thumbs were starting to turn red and a bit raw from unnecessary friction. So far, it's been a decent aid in saving my thumbs, well, in addition to newfound moderation. I also have a Vanfit screen protector to keep my screen scratch free, extremely handy when my Switch is tossed into my bag and finds it's way next to my keys...

With other games, like Mario Kart, Mario Party, and Smash out and coming out, I figured that getting some extra Joycons might be a good idea. Plus, it would bring forth more enjoyment from those games, as I could include more friends into the game. So, I went back to ColorWare Inc. to order a complimentary pair to my Switch console. 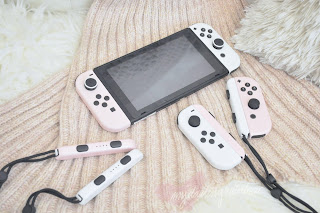 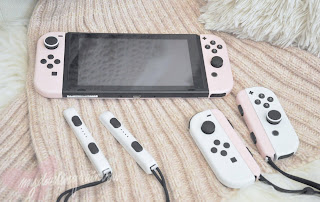 My Joycons arrived just 2 weeks after placing my order and they were just as beautiful as my main system. I ordered an opposite set to my original Joycons, so I can switch out the colours if I ever wish too play around with the look of my system. 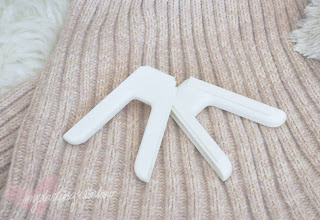 With new Joycons, I started looking for some Joycon grips to have for myself and a +1. With my own Joycons, I haven't really liked the standard grip that came with my system, so I wanted to find a set that had a smaller profile (since I have small hands) and that matched my Joycons. I found the perfect set from Dream3DPrinting on etsy. 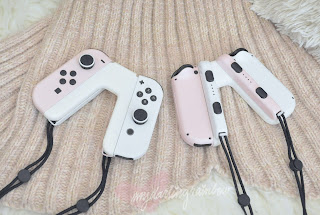 The grips arrived in roughly 3 weeks from the date I ordered them. The grips are 3D printed, and very smooth to the touch. They have a slot where the Joycon slides in smoothly and fits very securely. In addition, something I absolutely adored was there was an additional slot in the back to also hold the Joycon straps, which makes storage very convenient. 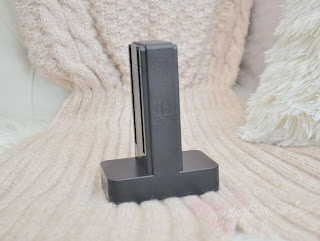 To account for my extra Joycons, I needed a way to charge them when apart from the main system. So, I found the PowerA Nintendo Switch Charging Dock, which conveniently charges all 4 of my Joycons. 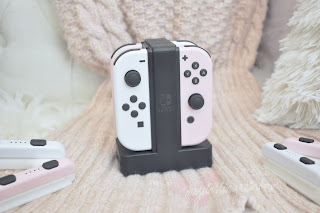 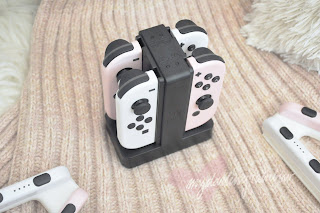 When docked, a LED light showcases the status of my Joycons and when they're fully charged. Plus, it serves as convenient storage for when my system isn't in use. 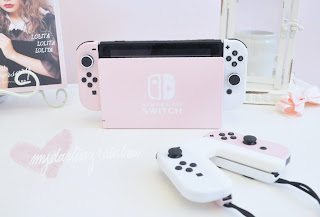 Though it may not look it, I have done a small additional add on to my Switch dock. With all the research I did, I've found people have had issues with the front section of the dock scratching the glass of the Switch. Viable popular options to negate this issue seem to all be types of dock sleeves, but since a sleeve would cover up my pink dock, I wanted to find another option in prevention. 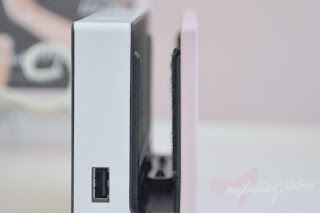 I then came across SwitchSafetyStrips on etsy, who sells pre-cut felt strips that apply to the inside of the Switch and cover up the area that has been said to scratch the screen of the hand held console. I like that it's subtle, effective and it keeps my Switch firmly in place within the dock. I ended up only applying the strips for the front segment, as having felt strips on both sides felt too tight on my switch as it had the extra bulk of the screen protector. 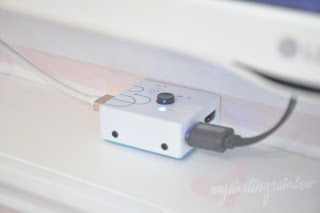 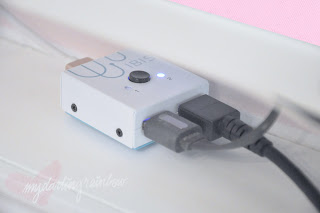 As I'm on the subject of the dock, I want to move into talking about how I connect my Switch to my television.

My TV only has one HDMI port, and originally I used it for my Chromecast. So, I needed an option to have both hooked up, and convenient to access (since my port is behind my TV and accessing it requires me fully dismantling my television stand). Thus, I was forced to figure out my own way to solve this issue.

My solution was the Sewell IBIS 4k HDMI Switch Box and Rose Gold Male to Male HDMI Cable. The HDMI Switch Box connects to the HDMI port, and gives it an accessible dual extension. Though, it only connects one device at a time, but switching back and forth between devices is as easy as pressing a button, pictured above. 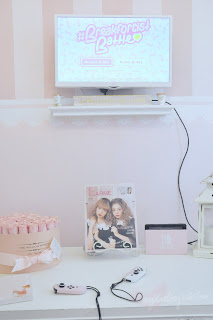 Also, the Sewell IBIS is extremely small, and is easily hidden from view. 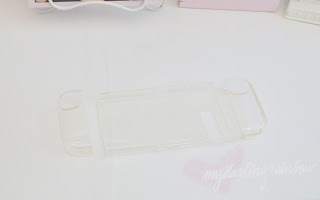 My newest accessory addition, is a casing for my Switch. I still haven't found the perfect case, but as of right now, I have settled on a clear bumper for my console. 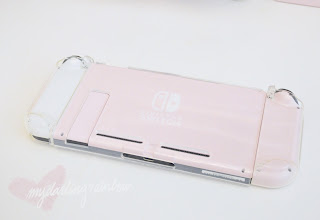 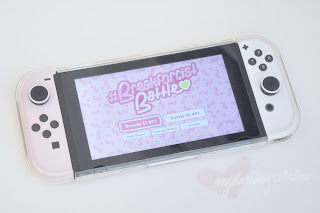 The clear casing works just fine, but it doesn't protect the front of my system and my joysticks do get a bit jostled about in my purse. Though, I do enjoy that the case is segmented in 3 parts, so when I go to disassemble of the Switch or go to place it into the dock, it's very convenient. Still, it would be great if there were better cute storage options available for the Switch console. 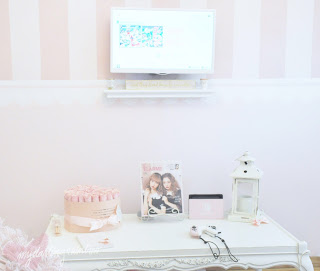 At the end of the day, I'm so happy with my Switch, and that I've finally joined the new Nintendo bandwagon! If only Nintendo released an official pink system initially~ but at least attaining one was possible. Regardless, I'm so satisfied with just how well it all turned out!

I know that there was a lot of curiosity about my Switch and my accessories, so I hope I was able to answer any questions that were initially sent my way. Though, I wish I could properly answer this question, but I can't say I have many game recommendations~ As of now,I only have Mario Kart, Splatoon2, and Breakforcist Battle (which is a cute block busting game). Besides, Pokemon and the upcoming group game releases, the only title I'm eagerly awaiting is Katamari. Outside of those, I actually have no idea what type of games I would like;; I'm still very much a newbie outside of MMORPG's..

So, any games for the Switch you love/recommend!? I'm actually very curious to what other people enjoy!