I was part of a music video~

Just like the title says, I was able to be in a music video yesterday. It's been a good 2 years I believe since the last video I was in was filmed? I believe this one is my 12th video? I'm not sure any more because it's been quite awhile.
I am kind of really excited for this one to come out because I think I may be visible for a good portion, also unlike most videos I've been in... Honestly, it may be because of my weight loss and that I am wearing camera friendly makeup.... Meh, it's still all good. 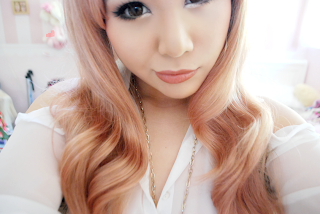 Well, here's my makeup. It's actually quite different than what I usually wear as it's all matte and dark brown and black based rather than bronze.
I also super contoured my whole face, and looking back, I may have gone a bit contour crazy haha.
Oh! And this time, instead of drawing my lips smaller, I decided to just outline my full lip, so far I've been getting a nice response from it and may continue doing so. 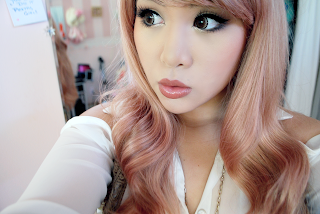 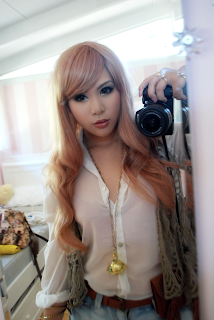 So, above is what I wore to the video shoot, but the stylist had me change and I realized it's because a lot of girls were already wearing something similar.
Oh! I am wearing something from F21, which is crazy because I don't really like that store/brand. Honestly, I just needed a cheap purchase to break up my white blouse, if anything, because pure clean white doesn't come up on camera well. [I'm kind of glad my outfit was switched because how the girl styled me was really cute!] 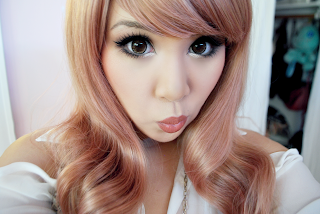 Ah, yes, more weird faces. Smiling pretty for the camera feels so unnatural and odd to me still. I'm also sure in the video I made a bunch of crazy faces too. 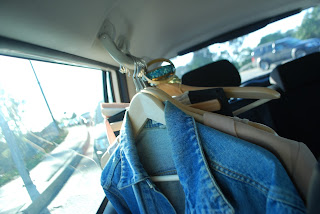 All my clothed for set. I may have brought too much, as they gave me a clothing rack for my stuff.. Actually, I was the only one to bring hangars but that's because most of my clothing is super wrinkly. 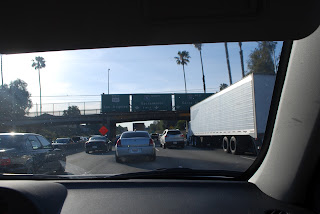 Yeah, making our way to the Valley through rush hour traffic if most definitely not one of my favorite pastimes.

Any who, we got there and oh my gosh, it was so shady and we parked in this weeded dirt lot with a paper sign that said 'crew' and we had to walk to set which was like, a block away?
I was so used to being picked up by a shuttle bus that would pick us up from parking to arrive to set, even if set was a few houses down, so this was an utterly new experience. 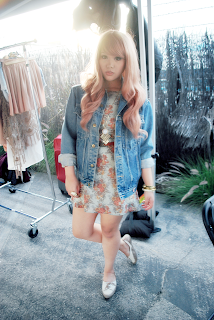 Well, we arrived safely on set and the stylist chose this outfit for me. Can I say that I LOVE this outfit, if it were me styling it would have been a completely different look in all honesty.
In my outfit I'm wearing:
Guess vintage denim jacket
RED floral cut out back dress
RED abstract necklace
Topshop flower clasp belt
Urban Outfitter oxfords

Before filming though, I was told to wear my Litas, so yeah. My shoes in the video are my taupe JC's. 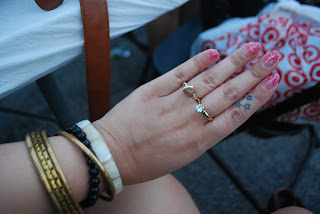 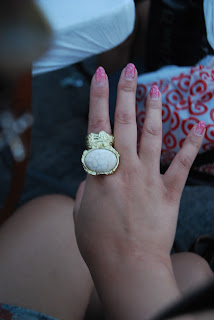 Here are some unattractive pictures of my hands, but it's for a purpose of showcasing my accessories. 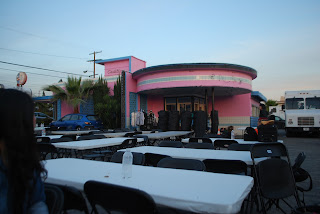 So, on to what I can tell you. We shot at this super cute and creepy motel, pretty much in the middle of nowhere. I am in love with the pink colour of the building.

Uhm, I'm trying to think of what I can tell you guys, as I signed a non disclosure agreement[?] I believe it's called...
Hmm, I'm part of the clubbing night time scene.
OH@! The video is for a band called, 'Midnight Red' and the song its self is like a pop, dance, trance summer anthem.
The cast of actors on set were super sweet, minus these tweens that smelled really bad and kept taking pictures, which you're not supposed to do. I'm almost positive they sneaked on set because you had to be 18+ to be on set.... Whatever.
Hmm, I want to say that I might be on camera a bit, but with my experience with how it's edited, you may just be able to spot my hair, hahaha.
Oh yeah! I got freaking burned by sparks from this smoke flare that was used and I was told to go 'party' and dance around the guy waving it around and sparks started landing on me, but I'm a trooper and didn't complain while the camera was rolling, durr, that would be super shitty and unprofessional. But, I did tell someone after and stuff and yeah. I'm okay it looks worse than it actually is to be honest.
The band guys are pretty chill, and super short. But that might be because I was in my litas, but I'm 5'3" and so that would make me 5'7"? in them, and I towered over them... Can I state my mind? Well it's my blog so I will, I thought the singers/band, whatever, would be cute in real life, but they're uhm, how can I phrase this, did't reach my expectations look wise??? Haha, I sound like a superficial meanie, but I guess I was imagining like, 90's boy band cute? Something like that.... [though, some of the skater guys on set were super hot and sweet!]
Yeah.. Well, I guess to know more, we'll just need to wait until the video comes out. 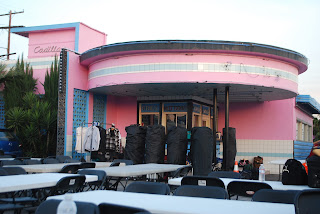